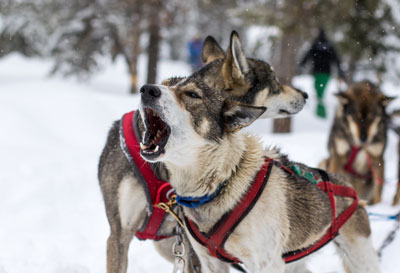 Eighty-five mushers with teams of 16 dogs each took to the snow on Sunday in a race that pits man and dog against Alaska’s unforgiving wilderness. This year marks the 44th anniversary of the first Iditarod Trail Sled Dog Race, a long-distance race held each March to determine the best mushers and sled dog teams.
The Iditarod’s grueling trek spans nearly 1,000 miles northwest across the state, toward a finish line on the western coast in Nome. The earliest finishers won’t reach this destination until early next week.

The Iditarod is held, not just as a popular and highly-competitive sporting event, but also to commemorate the January 1925 “Great Race of Mercy” which gave Balto his fame.
During the winter of 1925, the people (especially the children) of Nome were threatened by a diphtheria epidemic. The town was icebound and supplies could only be brought in by sled dogs. The nearest available antitoxin was more than 800 miles away in Anchorage. The serum had to be sent by train and then passed between twenty mushers over 674 miles. More than 100 dogs made the delivery possible, running in relay fashion for no more than 100 miles each. Gunnar Kaasen, of Norway, and his lead dog Balto made the final stretch and thus became the public heroes of the mission.

There are more than two dozen checkpoints along either trail where mushers sign-in and camp out or retrieve drop bags of supplies. During the eight to 15-or-more-day race, every team must take one 24-hour layover and two separate eight-hour layovers. On the trail and before the race, veterinarians check the dogs for signs of foot and shoulder injuries, respiration problems, dehydration, diarrhea, and exhaustion. Drugs used to mask symptoms of injury are prohibited.

To date, the fastest finishing time is held by Dallas Seavey and his team – clocking in at 8 days, 13 hours, 4 minutes, and 19 seconds in 2014. Seavey was also the youngest musher to ever win the race at the age of 25. His father, was the oldest to win at 53.